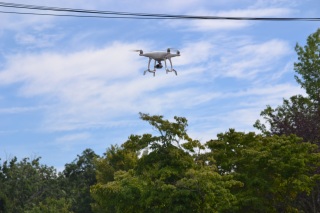 Wow.  I’ve been really slacking off on blogging so I’m on catch-up mode this week.  Doug arrived back in NC last week, after the usual (expected) airport delays, bringing with him LOADS of pints of tiny Maine blueberries.  And a DRONE.

The blueberries from Maine taste nothing like blueberries from anywhere else.  They are petite and burst with luscious freshness and, after a few mouthfuls, they turn your teeth blue.  I kid you not. It’s awesome.  It’s also a great party trick.  Plus, they are a natural antioxidant for all you people out there who wanna be healthy and all that stuff.  Doug’s flights were delayed delayed delayed and he had to wait for hours for a flight from Charlotte, NC but he wouldn’t stay over in a hotel because he wanted these indigo-colored babies to arrive fresh.  What a nice guy.  We shared some with our friends here and froze the rest for later.  After I ate so many I had blue teeth.

The other gem Doug brought here this trip is a DRONE.  He’s going to use it for work/business purposes but he couldn’t resist bringing it to learn how to operate it.

If you want to turn a grown man into a 9 year old boy, get one.

The neighborhood boys (and men) have been out and about test-driving around the campground.

Zuma is wary.  She refuses to sniff it, probably she doesn’t like the buzzing sound, but she likes to watch from afar.  Ah yes, boys and their toys, gotta love it.