Yesterday was a bright, hot day and I had to run some errands so Zuma and Blanca and I went for a drive around Ocean City. In many places here, if you stand in the middle of the road on this thin peninsula of sand, you can see the bay on one side and the ocean on the other. The main road is lined with shops of every description so it’s pretty easy to find what you’re looking for …. just keep driving in a straight line and you’ll find it on one side of the road or the other.  Adventuring for the unimaginative.  But that’s a good thing right now so I can get used to driving Blanca.

After we explored the city, we went to the beach.  Zuma was very excited to leap in the waves and gallop around on the longe line like a lunatic puppy.  She is 3 1/2 years old now and, with Great Danes having such a short lifetime expectancy, it does my heart good to see her goof off.

We met lots of people, including a couple fishing for striped bass from the shore; they said it’s still early for them because the water is too warm for the fish to come here.  Perhaps they haven’t left Maine!   Zuma was thrilled to meet three children the ages of our neighbors, Elsa, Roza and Theo.  I know she misses them.

Speaking of fish and seafood, it’s crab and shrimp central here. Maryland is famous for crab but the season has passed; a local informed us the crabs sold and served here now are from further south (like Louisiana).  Must try some before we depart.
Zuma tracks in the sand and foamy waves. 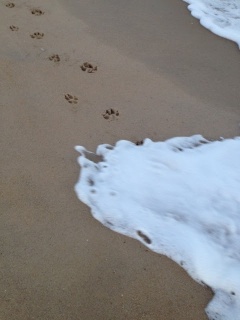 Zuma and her Lamb Chop stuffed toy that Emma gave her.  They have taken over Doug’s bed since he’s not here right now.  It was all Lamb Chop’s idea. 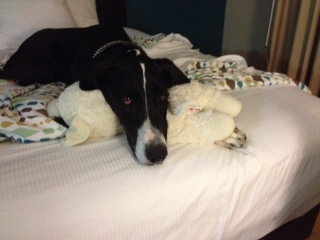 Today the temps hit the high 60s, perfect for a good stroll.  It took us 4 1/2 hours to walk our usual route (we can do it in an hour and a half on a weekday) because there were so many big, little, unusual and cool dogs and fun people.  I started counting benches and got up to EIGHT and got distracted by great people, most with a nice dog, so I gave up.  For today, anyway.  This is Zuma trying to “get small” so as not to intimidate the teeniest dog on the Boardwalk. 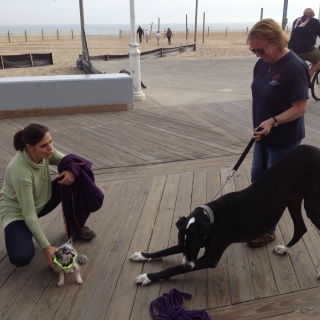 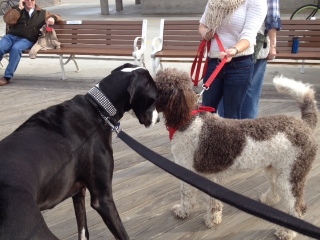 A cool guy who performs magic tricks and card tricks.

Two traveling dudes and a dog:  Lefty and Armin and Twitch.
They gave me lots of tips about places to see.  They also have vans and drive all over the country.  30-something hippies, nice guys. 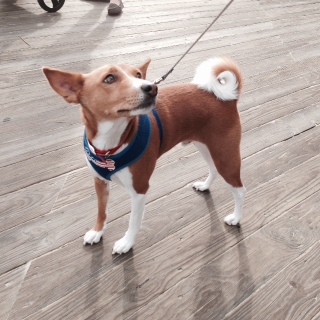 Zuma and her entourage.  Initially, they all snarled at her so she laid down and pretended to be small and they were like, “Oh, she’s not that big” and we had a nice long get-together with Zuma playing “Mother”.  She was thrilled to have them all running around her and they felt pretty cool about the whole thing.
A Win Win situation.  Dozens of people lined up to take photos and comment on how kind Zuma is, she is true to her breed, she’s a Gentle Giant. 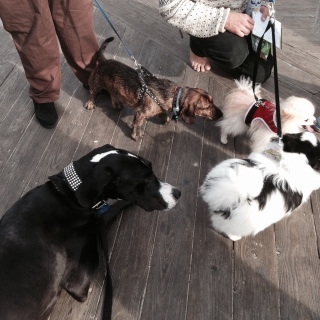