We have decided this is the BEST time of year to visit Ocean City because there are only a handful of tourists here and the weather is excellent.  It must be mayhem in July and August when the Boardwalk comes to life with crazy loud music and zillions of people and the Midway fired up.  But for now, everything is really quiet and pretty darned nice.  The visitors here truly appreciate the calm, the sunshine and the overall peace.

At our hotel, we have a whopping four cars in the parking lot tonight.  It was busy on the weekend because it’s a pet-friendly place and there were dogs everywhere: in the lobby, on the grounds, in the elevator (dog owner, seeing Zuma’s size:  “Ah, I’ll wait for the next one” …. good plan! What a circus it would be in the elevator with a few little fluffy yippers nipping at Zuma’s ankles).   Little dogs act really tough (with their owner backing them) and vocalize their aggression, scrambling furiously in place like cartoon characters threatening to fearlessly rip her to shreds if unleashed.  Zuma regards them quizzically, head tipped sideways, then she regally carries on.  She is so kind to the little dogs and I can tell she wants to one of them when she grows up.  They are ruthless little brats.  THEY are the enemy.

Every now and then we meet a confident dog and they’ll have a bit of a playtime with Zuma.  This is Rupert, an Old English Sheepdog puppy with nerves of steel.  He grabbed Zuma’s leash and was ready to take her off on an adventure.  He’s only 8 weeks old!  What a cool dog. 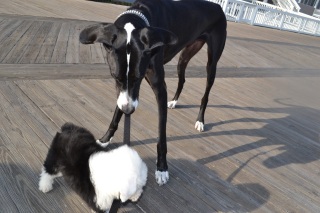 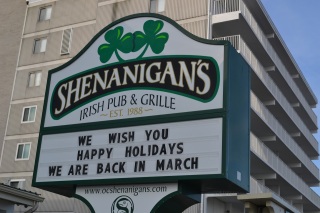 This evening, after Zuma and I walked ten miles total today, I was still feeling like walking some more (must be the new light shoes, haha!) so I went out for an hour’s brisk walk on my own.  Nobody even noticed me without my dog.  Usually we can’t go 15 feet without people talking to us her.  I may be developing an identity crisis. 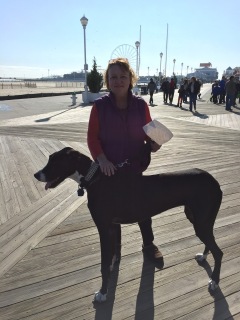 At one of the big toilet facilities on the Boardwalk, there is a group of people (mostly men, one or two women) who cloister in the sunshine each day, up against the wall of the bathroom.  One of the retailers I see regularly told me this morning that “They are the homeless people”.  “Is there no shelter in the city?” I asked.  She told me yes, they likely sleep there but they hang out outside the toilet building all day.  It is sunny and gives them a break from the wind and weather.  Doug noticed them the first day; they have bikes and he saw them peddling to the site smiling and clutching wrinkled brown paper bags.  I guess I missed that.

One of the men talked with us on the weekend, while petting Zuma.  When he learned she is a “rescue” he told us he had rescued a dog and it was the best thing he’d ever done in his life.  That was in 1980.  He is a kind man, Zuma really liked him.

They are a quiet group, I hear them laughing and talking when we pass by.  They wanted to pet Zuma today and she was cool with that.  I let her be the people barometer.

I find it sad that they lead such a pointless, unambitious life, hanging out on the Boardwalk all day.
Uh, wait, that’s what I do.