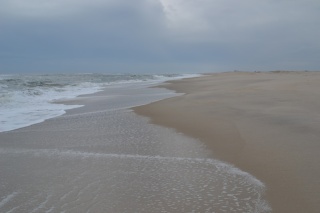 Monday, December 7th, Ocean City, Maryland.
An overcast day with temps in the mid 50s.  After breakfast, we headed out for Assateague, home of the wild ponies made famous by Marguerite Henry’s book ‘Misty of Chincoteague’.  At the Visitor’s Center the woman told us there hadn’t been many ponies sighted recently.  I said to Doug, “We’ll see ’em, they’re waiting for us”.  At first we didn’t see any ponies but, as we were heading out we 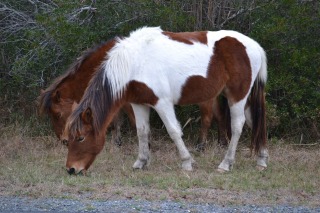 saw several on the side of the road.  I was able to get a few pix (nothing special but I didn’t want to overstep my bounds).  There are definitely shades of Misty in these guys.  The island is barren, fine white sand with beach grass and pines and scrub.  There are more trees for shelter than I remember from a previous visit in 1982.  I think about the ponies when there is a major storm down here.  They seem to fare well. 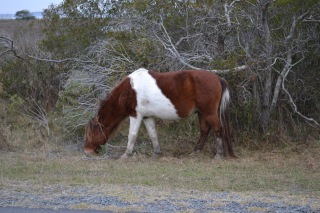 The ponies are in good flesh, their feet are amazing for ponies who never see a farrier; they are very calm and have sweet faces.  I didn’t want to approach them but they walked right up to me.  They are about 12.2 hands at the max, solid boned.  Supposedly brought by the Spaniards (due to a shipwreck), they have managed well on this tiny thin sandbar strip.  We also saw several tiny Sika Deer right beside the road.  The woman at the Visitor’s center said that people feed the ponies (!) and this year one man was captured on camera trying to move a pony with his CAR.  That is in court now.  He will be heavily fined.  A woman filmed it and turned him in. 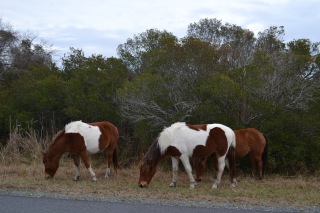 We bought a pass to the Park so we can return.  It’s a magical place. 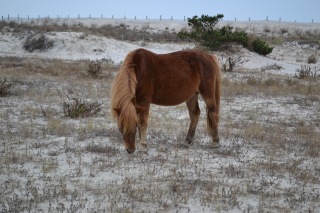