Kelly cracks me up.  Ever since I found out that Sandra Bullock and some other celebrities have homes here, Kelly launched into Super Sleuth mode. 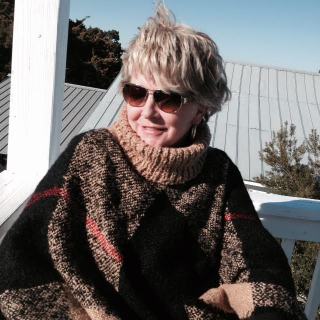 Kelly located Sandy’s home and she’s our neighbor!  Who knewwww?!  Doug says now to find John Mellencamp’s getaway home on Tybee!  Miley Cyrus has a place here, too, but we don’t care.

I have been struggling with this computer.  On the 9th I spent the day inside trying to write, but the computer kept acting up.  I called Google for support.  They wanted money.  We already paid for the Super Duper Protection Program, so NO.  They told me my computer has “malicious viruses”.  It feels like a scam.

The constantly revolving cast of campers keeps life interesting.  An elderly couple parked near us last week and the man was very friendly.  As it turned out, he is a professional Santa Claus “and I take it very seriously”, he added.  He lost his dear dog one Christmas Eve (oh, the irony) and his neighbor offered him a small, fuzzy bundle of puppy. He accepted the little furball and they quickly bonded.  His name?  St. Nick.  Nick for short.  “I wanted to call him Bubba but my daughter insisted on St. Nick”, he told us.  Nick and Zuma met and liked each other (Zuma likes everyone, man or beast) until Nick tried to hump Zuma’s head.  Having never experienced such sexual boldness, Zuma looked quizzically at me and I swear she rolled her eyes at me as she swiftly walked away from Nick.  She’s just not that kinduv girl, Santa.  And Nick may want to rethink his Christmas list.

Shortly after midnight on Monday the 15th I woke up with baby aliens gurgling inside me.  Instinct told me that was not a good sign.  Food Poisoning.  Needless to say, the week was pretty much a total “write-off” with no stamina and no computer.  Plus it was rainy and windy a few days and Zuma doesn’t like that kind of weather.  I’ve been too weak to do much of anything but am on the mend now, thankfully.  I know it was triggered by lobster bisque from a large chain grocery store.  I should have known better. Never again.

Doug arrived this afternoon and pulled the laptop together.
In the meantime, I mustered up some courage (in my lucid moments) to contact the people I thought were Zuma’s breeders. When I called I delicately questioned the date they had a litter in April, 2012 and it was Zumas birthdate (according the the veterinary vaccination records that came with her).  It was a challenge to ask her if they had traded an unnamed 8 week old puppy for a lawnmower but I inquired anyway.  She immediately burst into tears “That was my husband, I didn’t want him to do that”.  I knew then my hunch had been right.  I just didn’t know where to begin.  For the rest of the conversation, as I explained that the totally neglected dog had been rescued by a kindly neighbor from the lawnmower people, she sobbed.  I struggled to avoid thinking about her husband getting a skillet across the head when he got home that night.

The breeder thanked me profusely when I assured her Zuma is safe and well and much-loved.  She listed off the names of Zuma’s parents and there is no worrisome medical history in the families she comes from.  Phew.  Interestingly enough, both her parents are now retired and her mother is a therapy dog.  I could tell this woman really loves her dogs.

I felt horrible disclosing the torrid truth, but we both had to know the real story, about how a good Samaritan neighbor intervened when she saw the 5 1/2 month old puppy in a crate too small to stand up in or turn around and paid the owners $200.00 for her, threatening to call the authorities if they didn’t comply.  About how the dog was standing in 6 inches of feces and urine and rarely let out, except for occasionally being tied with a 3′ leash.  When I met her, I cried.  Her feet and skin were rotting.  Her coat was horrible and she was THIN.  About the fact the lawnmower dealers were feeding the puppy cat food.   And that her worm burden was so huge my veterinarian said she felt sorry for me when she looked at the egg count.  The puppy was severely overloaded with parasites, fleas, worms, yuk.  The poor puppy.

The Good Samaritan woman didn’t need another dog, she lived in a townhouse with her husband, six children and a Newfoundland.   But she sure as heck wasn’t leaving the dog there.  The people who had the puppy were moving and they took the money and left her with no emotion, I was told.

The Rescuer bathed the puppy and fed her properly and did her best to control a serious flea problem.  But with this Wild Child and all the other household occupants, she knew quickly that it was too much.  She made a poster and took a copy to several places hoping to find the puppy a loving home; she delivered one poster to the grooming salon where our daughter was working at the time. Emma immediately called me as I’d been looking for a rescue Dane for two years.  The rest is history!

I admit, I was a bit shaky having this flung at me with no lead-up, but I had done a lot of “homework” and I knew this would be the breed for me.  We’ve always had Shepherd mixes and one Lab so we are used to large breeds …. but Great Danes are a different dog altogether.

I wanted a dog I didn’t have to bend over to pet, one who would go with me when I ride my horse on the farm.  A friend of mine had one, he was fabulous.  His name was Zazu and he was adored by all for his genuine, gentle personality.  Once I met him, I was hooked.

Emma and a mutual friend drove me to the grocery store that sunny September afternoon and we met the rescuer in the parking lot to meet the puppy.  I met her and then had to seriously think about this huge commitment.  But I couldn’t put that sweet, struggling dog out of my mind.

We went back again after five days.  I knew it was the ight thing, take this dog on and it would all work out.  Eventually.  She was WILD at the end of a leash with newfound freedom.  She was all legs.  She looked like a dog crossed with a giant spider.  I had to think about it very, very seriously.  This was a huge commitment.

Emma and our friend took me to a local restaurant and we went over the pros and cons as they fed me two Bloody Marys and the next thing I knew Emma was driving us all home with a crazed Great Dane puppy bouncing around in the back seat.

Emma was a Champ.  She took the puppy right to the grooming salon where she worked at the time (Yankee Groomer in Rockport, Maine, thank you, Liz) and bathed her.  She came home smelling much more fresh and full of herself.  She knew she was HOME.  She bonded immediately with Emma and I.  When Doug arrived home from work, she growled at him.  Protecting us, I guess?  She quickly warmed up to him.  She was just so desperate to find security and her low rumblings were a sign of her insecurity, I think.

She was a sad sack of a dog.  Malnourished and over exuberant about any attention bestowed upon her.  She was pooping spaghetti from a roundworm overburden.  Emma had taken care of the flea population and we had put her on Heartworm/flea medications immediately.  Never again did she have a problem with parasites.

Now we had yet another orphan for the farm and our family.  It’s difficult to choose a name you want to call.  But I knew exactly what her name would be.  I wanted it to start with Z, in honor of Zazu who inspired me to find a Dane.  I chose the name Zuma.
It means peace in Hebrew.  I’m not religious in any way, shape or form and I’m not Jewish, but this darling dog needed a good karma name; my research showed me that Gwen Steffani named her sone Zuma.  If it’s good enough for Gwen, it’s good enough for us. 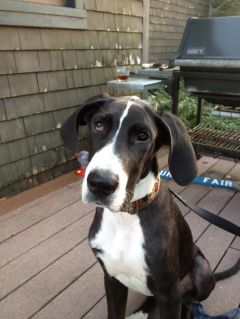