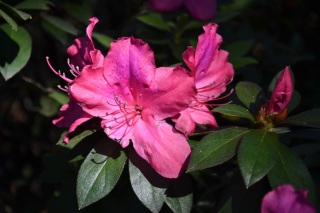 Doug has to leave in a couple of days to go back to Maine so we decided to go on a day trip today.  After thumbing through some touristy guides, I found Darien, GA, listed as an unspoiled shrimp fishing town with a nice seafood restaurant.  Kelly had told me about this place and highly recommended it so we started out for a seaside excursion.

On the way we drove through Savannah so Doug suggested we walk Zuma at Forsythe Park and a then stop for coffee and tea at his new fave coffee shop. 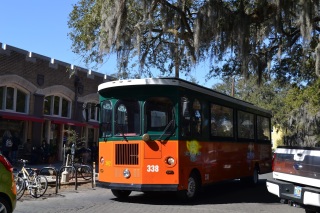 The Azaleas are starting to peak now, the daffodils are in full bloom as are the Camellias.  It’s Spring here.  But the locals still call it Winter. 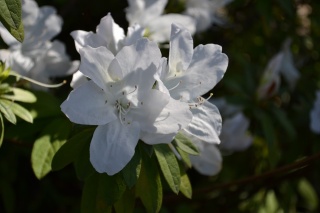 To our great delight, there was a Farmer’s Market at the Park!
We cruised through it and bought local honey for Zuma (the vet suggested a TBSP of local honey a day to help with her skin allergies), a loaf of spinach bread, homemade Brie, candied pecans and ginger molasses cookies.  Everything was homemade and delicious.  Zuma wagged her tail non-stop. 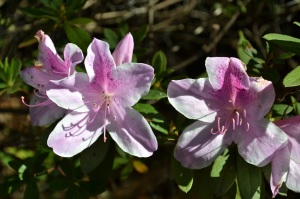 After we logged three miles on our pedometers walking Zuma around the Park we munched on these goodies and sipped our hot drinks as we headed south to Darien,.   While at Forsythe, we met some cool dogs and people, including “The Three Little Pugs”: 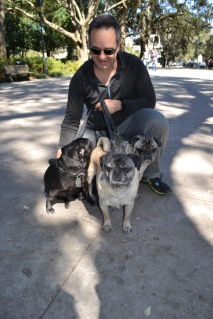 All rescues, all happy little dogs who loved meeting Zuma.
Savannah is so dog-friendly and people here really take care of their dogs.  We’re starting to get to recognize the regular walkers.
Off to Darien!  To call it a sleepy little shrimping town would be pretty  uh …. exact.  There’s not much going on in Darien.  Curious me, I wanted to check out the shrimping fleet. 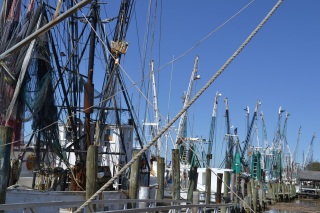 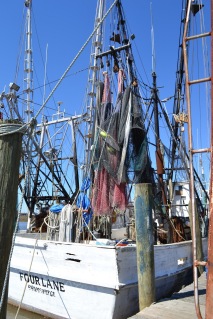 We had the great good fortune to walk down to the dock for a closer look and we met up with a guy who was happy to tell us about shrimpin’ and eager to hear about lobster fishing in Maine.  He works on the boats (but doesn’t go fishing, he suffered seasickness once and that was enough for him) so I picked his brain.  He informed us that the shrimp season is year round but once the weather warms up the shrimpers “have to go chase ’em”.   So we are here at the right time, there’s lots of fresh shrimp available right now.  The row of boats at this privately owned dock where the guy works is all owned and operated by one large family. There are 17 boats in the fleet.  It’s really impressive. 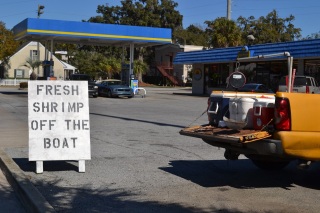 Throughout the village of Darien are a lot of very cool old buildings: 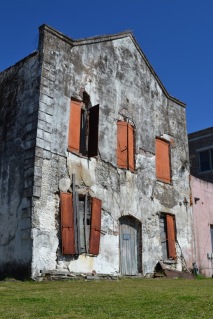 Many are built with shells and mortar: 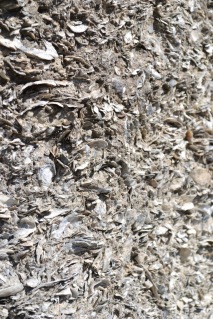 Kelly recommended Skippers’ Fish Camp for lunch so we went there that day and again two days later for another day trip fresh whole grilled Flounder and crab dip. 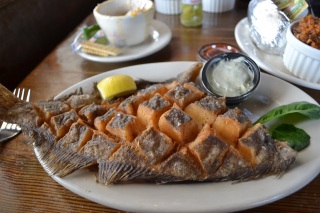 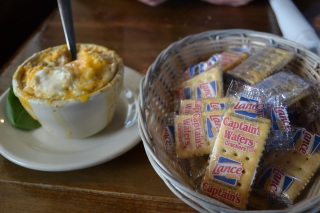 The residents clearly have a sense of humor: 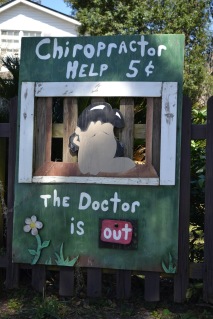 We walked Zuma around town and enjoyed the lack of tourists and the slow pace of life there.  We stopped into a new shop, it was open for only a week, a small shop, Turnip Greens.  They sell fresh produce and dry goods,  A real find hosted by a couple who are truly invested in putting Darien on the map. 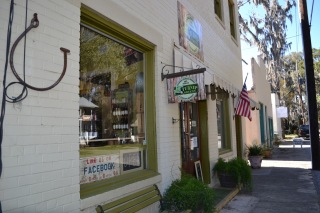 It’s a very small, unspoiled fishing town.  We will go back.