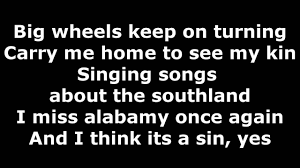 Fort Payne is known as “The Gateway To The Appalachians” and the mountains were visible this morning as we continued on.  First, we had to explore Fort Payne a little.  However, even though it was Saturday, none of the shops were open and we had a challenge finding a restaurant for a cup of coffee.  Fort Payne is pretty sleepy at this time of year.  We met a young man on the street who told us, “Ya ain’t gonna find nothing open today”.  Must’ve been because it is Thanksgiving weekend?

Being lovers of America’s downtowns, we took Zuma for a brisk walk and admired some of the main street’s charming windowfronts and buildings:

Fort Payne is the home of the band ALABAMA; the foursome is honored in the center of town with beautiful bronze statues and plaques celebrating the group.  (Sorry, terrible pic, early a.m. sun).

Sweet Home Alabama
Where the skies are so blue
Sweet home Alabama
Lord, I’m coming home to you.

On the road again, we called an RV Park and scored a site for the next two nights.  A 3 – 4 hour drive to Mississippi, the GPS announced.  After 6 hours on the highway, with a couple of stretches of heavy traffic and a few quick stops to stretch, we arrived at our destination in Mississippi.  Zuma needed some exercise and so did we, then we nibbled on a dinner and called it a day.