Zuma and I picked Doug up at the Ocean City/Salisbury Airport this morning and we drove to Berlin; I have been so excited about Doug seeing this sweet place.  We booked a table for lunch at The Globe, a restaurant housed in an old movie theater, lunch was absolutely delicious.  We both ordered a cup of cream of crab chowder which promptly arrived in a jumbo mug (!); it was incredible and totally satisfied our crab cravings.  We also had entrees.  Everything was scrumptious, the place was packed, the service excellent and lots of movie decor from the past is sprinkled throughout the building. 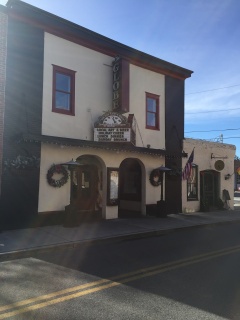 The Globe also offered $2.00 Bloody Mary’s so I had two of these.  (Doug refrained from temptation and only sipped on one because he was driving).  Then my fuzzy brain remembered that the last time I had two Bloody Mary’s for lunch Emma was driving my car and on the way home I looked in my rear view mirror and I saw a Great Dane was perched Scooby Doo style in the back seat. Seriously.
But that’s another story.
With the Bloody Mary’s taking effect and the streets filled with Christmas music and all the Berlin merriness and sunshine, I had visions of sugar plums dancing in my head.  We wandered around the coolest town and went into a few shops and purchased some really COOL stuff from COOL shops.

Doug likes Berlin as much as I do so we’re making plans to return tomorrow to do more exploring BECAUSE it’s close to Racetrack Garage and we have to take Blanca back there tomorrow morning because the *@!%* engine light popped on again on the way from Airport.  (WHAT NOWWW?!).  So Blanca is heading back to Race Track Garage for another checkup.  Sigh. 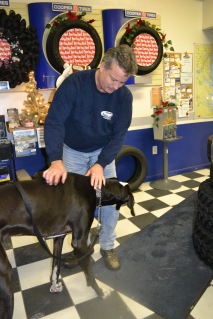 The funniest part of all this was when I called to explain my plight; George, the owner of Race Track Garage said we could bring the van in first thing in the morning but (laughing) said that I need to help him find a Great Dane for his sister-in-law!  Oh Lord, what have Zuma and I started now?!