All week the island and Savannah have been buzzing with energy as they prepare for St. Patrick’s Day.  Savannah has a huge celebration with 300,000 people generally flooding the city.  30,000 of them are expected to attend the parade.  It’s crazy.  Police security in the city and here on Tybee has been upped with “all hands on deck” in the city and law enforcement coming in from area forces. Personally, we’ll watch it on tv.  Waaay too many people and waaay too much green beer for us!

In Forsythe Park the fountain’s water is turned green.

Tybee’s parade was far more calm, a family affair, with people lining the streets and sitting on the edges of the sidewalk to take it all in.  Doug and I walked into the town to see how Tybee honors St. Patrick.  They do a great job!

Doug and I admitted we were apparently seriously unprepared for the event. Clearly, we missed “Parade 101:  How to Get Down and Get it Right to watch a Parade”.  These people appeared to be professional parade-goers. They had lawn chairs, rugs to sit on, coolers, even small tables set up with gorgeous piles and plates of picnic food and drinks.  It was so much fun watch.  We loved it even though we ended up picking grass spurs (like small burrs) out of our butts all the way home from sitting on the grass and curb.

This is the River’s End float, representing the campground we are staying at: 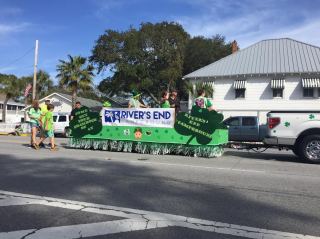 It was a great parade, with some excellent floats and marching bands, other bands and even a lively group of “Junkaroo” musicians from Nassau.  And there was a nice, easy, home-town pride.  Video clips coming next week, apologies ya’ll for the delay.