‘Good Morning, America, How are ya?’ I was doing the dishes this morning and suddenly I started feeling all sappy about the city. There’s just something about New Orleans that gets under your skin.  Or not.

I don’t think Doug’s feelin’ it like I am.  Yes, there are definitely “sketchy” parts of the city (the trolley tour guide even said so on our tour of the city).  It’s a big city.  It’s a fun town. It’s vibrant, creative, inspiring, flashy, surprising, busy, touristy, professional, classy. And, yeh, in some places, it’s kinda sketchy.   That’s what makes it fascinating.  We like to go off the beaten tourist path.  I like to see ‘the real’.

So, anyway, in my a.m. dish-washing sappiness, I looked up songs about New Orleans and I found this on youtube!  So let’s get all interactive here, ya’ll, come on, just drop everything, grab a cuppa, get your hippie on, click and paste this link and chill for three minutes of your whole life. I GUARANTEE this will make your day.  You will thank me.  And you’ll play it twice. And sing it in your head for three days. And share it with your friends.  And maybe even get all into it and look up the lyrics on youtube:

Thank you, Thank you, Arlo Guthrie, for singing this.  Thank you, thank you, Steve Goodman for writing this song.  One of the greatest poets of our time.  You got it right.

People watchers would burn their eyeballs out here.  It’s warm.  It’s ever-changing.  Homeless people flock here, hopeful for a handout from empathetic passers-by.  There are swarms of tourists at certain times of the day, night, season. Best of all, New Orleans is genuine, non-judgmental and so unique, so totally original. It all gets under your skin.

It’s unlike any other city.  For me, it has a magnetic kinduv feeling. The streetcars, The Mississippi River, the southern hospitality, the subtle French influence, the mouth-tingling Cajun and Creole aromas, the excellent live music resonating every few blocks, street bands playing jazz, blues and the real soul, the friendly people, the go-for-it attitude, the hustle-bustle-craziness, street artists and performers …. but that’s another blog …. the music …. ohhh …. 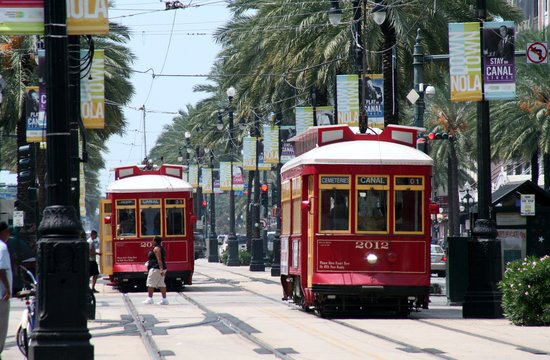 It’s difficult not to feel a plethora of emotions when you’re in the heart of New Orleans, it’s an honor and a thrill to be here. All around there throbs the bustle of commerce and tourism, businessmen and women racing to their offices in smoothly-tailored suits avec java to go, the daily grind of the heads-down homeless ousted from the shelter at 5 a.m., the resilience of the city’s people who are still recovering from the remaining signs of the ravages of Hurricane Katrina.  To really get to know a place is to see it in the mornings when it’s ‘real’.  I like real.

We learned a lot on our trolley tour:  New Orleans didn’t take the worst of it when Hurricane Katrina hit in the early morning hours of August 29, 2005, but it got hammered.  When the levees broke, the city flooded ankle-deep to knee-deep in places.  There was water damage a-plenty, but not like the areas outside the city. Within the city, the water wreaked havoc on the plumbing in the city and there were areas with severe water damage.  New Orleans is still rebuilding, restoring.  Old Man River races along beside the city, ‘rollin’ down to the sea’:

I’ve learned from the locals that the outer areas took the worst of Katrina’s rage.  Here at the RV Park, a swift 25 minute drive from downtown New Orleans, they received the storm surge and it was hell.  The owner showed me the high water mark in the office.  The painted line towered over me. Seven feet, 6 inches.  Think about that in your home.  OMG. This RV Park was completely flooded and destroyed.  It took them more than two years to rebuild.  They didn’t even get the worst of it here.

There is a fierce pride in these people.  As a visitor, I could label it resilience, but it’s more than that.  They will not be beaten.  They’re tough.  They love this land.  I get it.  Totally.

New Orleans was built on sand and silt and let me tell you, they have olympic-sized potholes here.  In multiple parts of the city huge excavations are constantly taking place to repair the water and sewage pipes. The plumbing in NOLA (New Orleans, Louisiana) went for a ***t, as they say.

As an example of the resilience of the people here, the local tv news channel hosts a segment on the nightly show called ‘Pothole of The Day’!  I learned from a local gal:  Simply send in a pic of a big pothole and there’s a committee that will work to get it repaired by the city.  It’s not uncommon to witness people tripping on the sidewalks where heavily-traveled stone slabs have popped from their bases.  I’m thinkin’ “Pothole of The Day” is proving to have a huge impact:

It’s one small step toward
the continuous rebuilding of New Orleans.
As they say here, “God Bless Louisiana”.

Goodnight, America, how are ya?