Almost two years ago when I was planning my journey, I was scoping out travel books and I read about The Red Caboose Restaurant and Motel in Pennsylvania. The gushing reports of it’s coolness made it high on my list of places to stop. 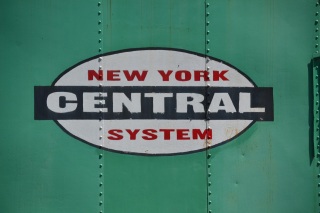 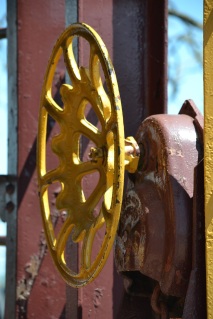 There’s a gift shop, restaurant and rolling fields all around.  I was really excited to go there.  We stumbled upon it as we were out doing the side-road tourin’ off-the-beaten-path thing and I saw a sign and we made a series of squiggly u-turns on jiggedy roads scented with acres of freshly-mown hay and landed there for lunch. I was out-of-my-mind-ecstatic we’d found it.  I love train travel and appreciate these old pieces being kept up. 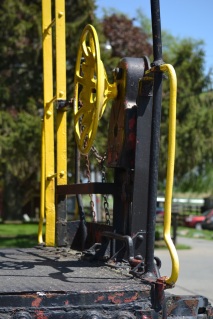 Our stomachs were rumbling for lunch but when I asked for outdoor seating with a dog, one of the hostesses said she couldn’t accommodate us with a dog.  In fact, she was freaking horrible and snippy and rude.  We rarely get that. In the South (not bein’ prejudice, ya’ll), people ACCOMMODATE.

We were asking for outdoor service and there was absolutely NOBODY, LIKE, NOT ONE FREAKING CUSTOMER in the place, nor outside on the deck that was listed as a “dog-friendly” lodging and restaurant on several websites.

The younger waitress said she’d set us up but the other (senior) one wasn’t budging.

Yeh, so, I wouldn’t normally belly ache because, okay, I get it, we have a dog.  She’s kinduv large.  We’re traveling and you’re listed in the travel guides as ‘dog-friendly’ so that’s why we came.  I shut my mouth and talked with Doug.  Damn it, I’m tired of the prejudice but I decided I’m going to behave myself and advocate for my dog.  Because she deserves it.  Because she isn’t rude or obnoxious and she’s a good soul.

The Health Department (understandably) doesn’t allow dogs inside establishments that serve food, but no worries, we’re accustomed to that.  We just wanted to sit outside and include our gal, we won’t leave her in a hot car.  There was plenty of seating on the deck and after I asked politely the second time, the “boss” waitress allowed us to eat there.  We made a deal.  Deck Only (which is what I had requested), pick it up at the counter; as long as we ordered take-out and ate outside with plastic forks and styrofoam containers that make Doug cringe.  #CutlerySnobbery.

It’s all part of life traveling with a dog, especially a jumbo one. “She’s just so BIG” the boss lady told me. I explained, “She’s very calm, she’ll flop on the deck and won’t be a bother and she’s a Registered Therapy Dog who works with Seniors and Schoolchildren”.  There were no fragile Seniors or vulnerable small children available for her to viciously attack and rip to shreds nor wheelchairs to push down the steps.  We were the only ones in the place.  The nasty waitress finally realized I meant well and we were ushered outside.  As Second Rate Citizens.  Talk about feeling like a major loser.  I kept my head up, stiff upper lip, all that.  Damn it.

I have to get over the prejudice people exhibit.  Even if I want to cry sometimes.  How do my colored friends and relatives deal with this shit????!!!!  Judged before people even know you.  What’s right is right.  This is so wrong to me.  Dog-friendly should be dog-friendly.  Regardless of size if the owners are on the ball and control the dog.

Zuma, in true Scooby Doo style, sipped daintily on cool water the young waitress kindly provided and then flopped out on the deck in her usual “I’m really not a pain in the ass and I don’t eat small children or knock down Senior Citizens” way and within two minutes she had a huge group (total about 30 in 30 minutes) of adoring fans swooning over her. Tourists, locals, Amish farmers.  In fact, we had so many people smothering her we couldn’t eat our french fries before they got stone cold.  I wanted to take pix of the crowds who met her but I was so choked  up I couldn’t even focus the camera.  I had to take an emotional break and leave her with Doug to go for a long walk on my own to shed a few tears.  It felt like when people judge my friends, my wonderful gentle colored/black/gay/artsy/eccentric unique friends.

Later, I apologized to Zuma.  She understands.  Most people are fascinated with her but some recoil in horror anticipating she’s a threat. At 36″ at the shoulder, 6′ 2″ in length and 145 lbs, yeh, she’s a big ole mutt.  But she’s a good soul.  She won’t bother you.

Prejudice.  It’s just not right.  It was lovely that total strangers flocked in droves to her (and she happily hopped up from her cool place in the shade and gave everyone individual attention, so happy she was accepted). Everyone received a lick and a dog smile and they asked a zillion questions and now they all want a Great Dane. Thanks, Zu, you’re a Rock Star and a wonderful ambassador for your breed.

One person having a shitty day can make a place sour but I see that a kind dog can change a lot of people’s mindsets and make a sweet experience. I’m learning.  I can forgive.  Zuma forgives.  If only all people would be so kind and understanding.  The world would be a better place.

After we ate our lunch and Zuma stood patiently for a zillion selfies with babies and toddlers who pawed at her and pulled on her velvet ears and was petted softly by elderly folks who were just tickled to meet such a huge, gentle animal.  Then the nasty waitress came out and petted and praised her as the crowd gushed about what a well-behaved kind-hearted dog she is.  Zuma deserved that. Broke my heart.  Prejudice.  It’s just wrong.

Remember to live and let live.